The Return of the Pumpkin People 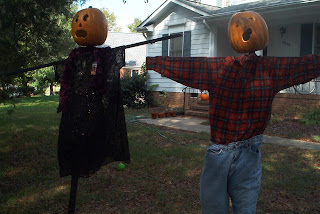 Well, last summer I rescued the pumpkin people from the trash. Yes, I almost threw them away. The first year I made them and put them up, they looked great. They were based on directions given in a Martha Stewart Living Magazine (or maybe it was her Halloween book). Anyhow, that year, I was so proud of them. A neighbor even told me that her child's walk was not complete until she took him to look at the "pumpkin people." Of course, that year I also put them up at the beginning of October so there would be lots of time to enjoy them.
Then last year came and nobody helped me. My eldest daughter was off at the university ... and she was the one who usually would help. I went ahead and bought the bales of straw, but I just couldn't do it all by myself. I put them up without stuffing, but they looked terrible.
Then, this summer, as I was cleaning up the yard, I found them behind some bushes. I went so far as to put them directly into the trash can (sans heads, though, which I thought I'd keep anyhow) ... but then, as our garbage day approached, I couldn't do it. I pulled them out of the trash and set them behind our privacy fence. Well, they did take an incredibly long time to construct! How could I just stand there and throw them away?? What was I thinking? Was I crazy or something???
Anyhow, I was sure this year the ground would be too hard for me to even try to get them in ... then it rained last week! It rained for four days straight!
SO, today, with Kent's help, we stuffed their outfits and put them up! They are extra scary this year, too, as they had stayed outside all year (and not in the shed as usual). Lots of spider webs and roly-poly bugs and earwigs and coccoons are in their clothing. The straw, a year old, is full of strange creatures, too!
If you look closely, you'll notice the pumpkin woman wears a purple scarf. This is one of the first things I ever knitted! She's missing all her stuffed crows, as they looked too gruesome to use. I left them outside all year, too. What a shame! I was just too tired last year, I guess ... I think her broom is up in the attic. I'll have to go check. The first year, I also hung a battery-operated lantern on her arm. This was great Halloween night so nobody would walk into the pumpkin people on the way to our front door.
Happy Halloween!
Posted by Nean the Bean at 2:02 PM

The pumpkin people freak me out a little bit. :)