A lot has been going on behind the scenes since my last post! Our eldest daughter got married on February 11 and, thank God, it was a gorgeous day! Although we had nothing to do with the actual reception, we had planned to host an after-rehearsal party at our house for our out-of-town family and the wedding party and friends.
When I started counting up how many people, I realized it would be about 40 guests! There were so many special touches I wanted to include ... and, making our mid-1970's home look nice is always challenging!
I started planning early.
A little background: our daughter has an interest in Japan: the language and the culture. She took Japanese in high school and college and has visited Japan several times. In fact, her husband proposed to her in a little planetarium restaurant in Tokyo. So, silver and navy, stars and Asian-inspired decorations were to be her theme.
From a sweet Etsy shop, she ordered origami flowers for her wedding bouquet and her attendants' bouquets ... and origami flowers for the groomsmen, as well. So, taking this idea, I made a few decorations, myself. I am sharing them here, along with links to the fabulous online tutorials that helped me so much ... just in case anyone would like to use these ideas.

We were able to find the original wedding invitations for all, so we framed them and put them on a little table in the hall, along with origami stars. 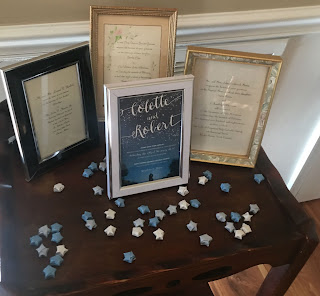 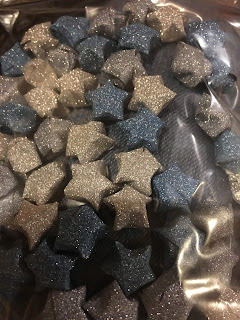 I couldn't find navy-blue sparkly paper, but I still think they came out nicely. While there are many tutorials for these stars, I felt this one is really well done and easy to follow: Origami Lucky Stars
If you'd like to use the same sparkly paper I did, I bought it on Amazon.com. Here is a link to it: Glitter Origami Star Paper I found it very easy to work with.

Okay ... so I had the front hall decorated a little and everybody really enjoyed seeing these wedding invitations that they really had never seen before! It was amazing we found them stashed away.

Next, I made paper fans to attach to the wall. Our dining room has a big, blank wall and these fit perfectly! I used lots of different scrapbook papers. They all work pretty well. The majority are card stock, but some actually feel like wallpaper samples! I bought them at Hobby Lobby, AC Moore and Michael's. Basically, wherever they were on sale. You will need quite a few, especially for the bigger fans. 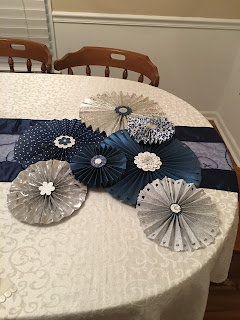 Before attaching them to the wall with 3M Command Strips, I laid them out on the table, then I took a picture of the arrangement so that I could recreate it on the wall. We ended up hot-gluing the smaller ones on top of the larger after we hung the larger ones on the wall. 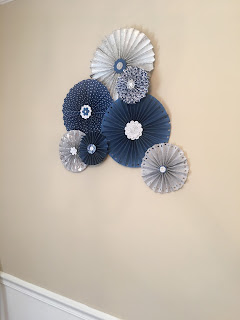 I tried to use a heart paper punch around the edges of two of the fans, just for something different, but I wasn't too accurate. Don't look too closely!
For the centers, I cut out round pieces of card stock and glued each down, then added another layer on top ... either a flower shape or another circle in a coordinating or contrasting paper. I added a tiny glittery dot on top of that. I also glued a card-stock circle to the center back of each fan to help stabilize it.
There are many, many paper fan tutorials if you do a search on Youtube. The basic idea is simply accordion-pleating paper segments and then gluing the segments together. I used hot glue. It was much faster.
I noticed some people used a whole sheet of paper and stapled it in the middle, as in this tutorial: Stapled Paper Fans and others started with smaller pieces, as in this tutorial: Paper Rosettes. I found those two to be the most straightforward and easy-to-follow videos. Another method uses even smaller pieces of paper: Paper Pinwheels. Whatever method you choose, they all produce the same effect. Varying the size of the papers, obviously, is what makes the end fan (or rosette or pinwheel) larger or smaller.

Another decoration I thought really interesting is the "manzanita" tree or "wishing tree." Whatever name you'd like to call it, it looks like simple branches decorated with hanging crystals. When I looked around for these, I was amazed at how expensive they are! "Why," I said to myself, "I have white latex paint in the shed! And silver glass glitter! I shall make my own!"
So that's what I did. I found an old branch that had blown off a shrub. I'm sure you have a few lying around your yard. Winter is the perfect time to find them. It doesn't have to come from any special tree or shrub. The branches just have to be attractively spaced and they need to be sturdy enough to tolerate holding a little decoration.
I took my branch and laid it on newspaper outside. With a sponge paint brush, I brushed on the latex paint, then, while still wet, sprinkled the glitter on it to make it look like a frosty, sparkling tree. I might not recommend glass glitter, though. Yes, it's lovely, but it is sharp. I cut my fingers in a few spots while turning the branches and sprinkling. 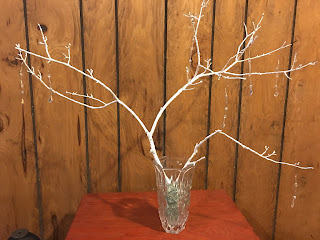 When dry, I put the branch in a vase and filled it partway with little glass stones that are sold in the floral sections of all the craft stores. They didn't have any navy. These were the closest to clear that I could find that day. They actually have a greenish tint, I think.
The ornaments are very easy. I bought a few Swarovski crystal charms (a few hearts and a few teardrops). I also bought a little container of silver bugle beads, a package of end-crimp fasteners, some very fine, 32-gauge wire (but you could use thin string, really) and a strand of glass beads. 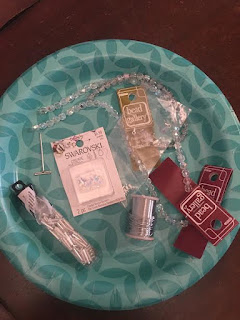 I just threaded a crystal with wire, then used a crimp, sliding it down the two ends to hold the charm in place. I then threaded the doubled wire through a bugle bead, a glass bead, etc. You can alternate them any way you'd like. Yes, the wire is so very thin that, even doubled, it can pass through the bugle beads. After I made the ornament as long as I wanted, I used another crimp fastener, then made a loop of the wire for hanging. I twisted it around several times to secure it, then cut the ends with a wire cutter. 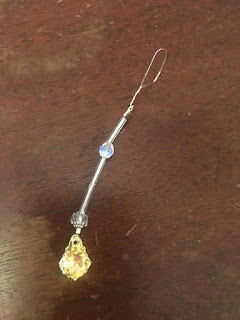 Here is the tutorial I used to help me: Jewelry Christmas Ornaments

I decided I wanted a couple of vases of origami flowers to echo the bouquet my daughter had ordered. I mixed in some silk flowers, as well. 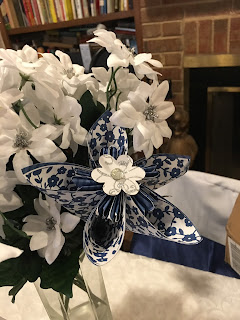 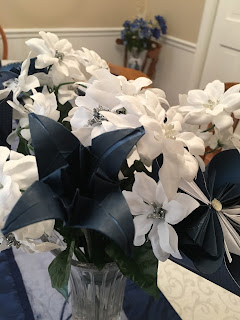 I used the same papers I had used for the fans, so that it would all kind of coordinate. It took a bit of practice. I found these tutorials the most helpful: Origami Kusudama Flowers and Origami Iris
I used hot glue to hold my Kusudama petals together.

After these decorations were completed, I started thinking about what to do with the paper napkins and disposable utensils ... how could I possibly make them look good?

Well, I found a great paper-napkin folding tutorial here: Folding Paper Napkins. Luigi Spotorno shows many excellent ways to fold a paper napkin, but the one I wanted for this event begins at 3:21 on his video. This man is really a great teacher!

I purchased these silver-and-white napkins at Party City. Using grosgrain ribbon, a little bit of silver-bead string, a couple of heart charms and a glue gun, I was able to make little napkin-ring like decorations. I think they came out pretty well. 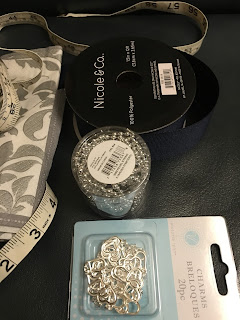 I used Mr. Sportono's folding method, then measured the folded piece all the way around. I cut both a strand of the beads and the ribbon to this length. I hot-glued the ribbon at the back. I then threaded one of the heart charms onto bead strand, then wrapped this around the ribbon. I hot-glued it at the back, as well. 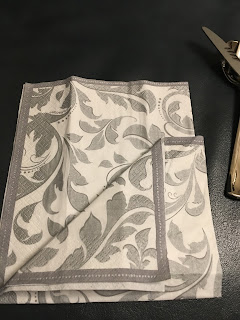 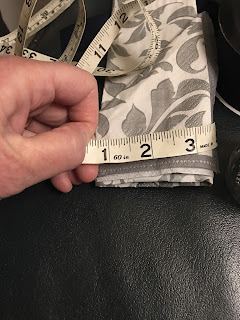 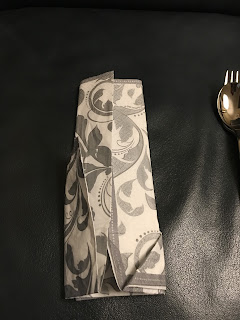 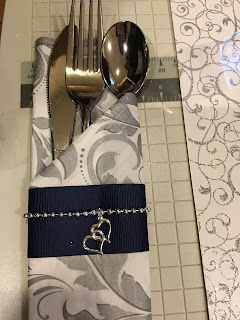 I didn't fold my paper napkin quite as long as the knife; however, I think the utensils still fit nicely into the little pocket.
Once those were made, I put them all aside. I then had a bit of a dilemma when I thought about the guests actually eating. Although we were serving a simple buffet of assemble-yourself deli sandwiches, we don't have enough room for everyone to have a place at a table to eat. I have never liked juggling a glass, along with my plate. The solution: trays from Ikea!
I purchased these Smula trays, which I found very economical, then bought paper doilies to fit over top. The paper plates and the utensils fit nicely. There was even room for a glass. The best part? The trays sat neatly on laps, and there were no drinks set down on the floor! 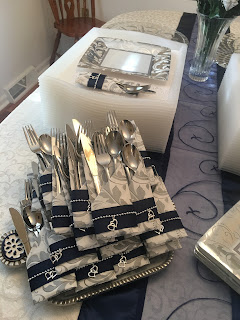 We decided for dessert we would have a groom's cake. My daughter's husband is a League of Legends fan, as well as a German-chocolate cake lover. So, I decided to make a German-chocolate sheet cake with his favorite character on top! Amumu!
Because one of the guests has a tree-nut allergy, I did not make the typical pecan-coconut icing. I filled the cake with a modified version, leaving out the nuts. And, because we wanted Amumu to show up in all his glory, I iced the cake in chocolate first, and smoothed it out. Using piping gel, I traced a picture of Amumu, put it on the cake and then filled in with piped icing.
We modified cake pulls a little to be non-gender specific, as we wanted the entire wedding party to be able to participate. So, before icing, I placed the charms under the cake, the ribbons hanging out. I was able to pipe a shell border right over the ribbon. 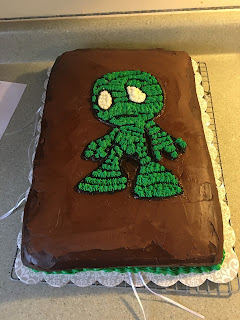 Everyone thought the cake tasted really good! And the groom certainly enjoyed seeing Amumu!
All in all, the party was a great success. Phew!
Now, onto making the decorations and planning for my son's wedding ... scheduled for this June!

Posted by Nean the Bean at 1:08 PM No comments: