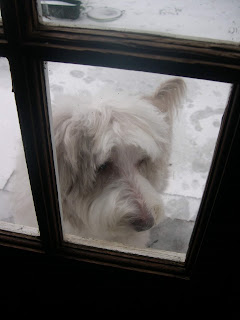 Here's Maggie waiting to get back inside!
Here's why: 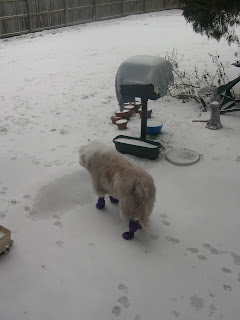 She doesn't like the ice on her feet ... but she's not crazy about her boots, either!
Posted by Nean the Bean at 7:26 PM 4 comments:

I haven't been posting lately ... not because of the holidays and baking and wrapping and cleaning ... nope. It's because my father has been so seriously ill. These past few months ... from October to now ... have just been a giant blur. Just when we thought my dad was turning a corner for the good, he fell the Sunday after Christmas (Dec. 27) and broke his hip. He needed an immediate partial-hip-replacement surgery ... and then he got pneumonia and they discovered he had another UTI ... this time, they phrased it as a "raging" infection. *sigh. His swallowing has always been weak, but after the surgery, he can't swallow at all. They just put in a PEG tube on Friday so he can still "eat." So, after about a week in the surgical intensive care unit, he was just transferred back to the orthopedic floor.
It's been very scary. Especially, since all my brothers and my sister live out-of-state and across the country, I've had to be the one to make a lot of decisions. I don't know why I'm always amazed at how God takes over in these situations. He's done it so many times, you'd think I'd know by now I'm going to be led in the right direction!!! I just keep praying and, somehow, just when I think I'll never know what to do, I get an answer as plain as day. Maybe it will come to me as I'm washing my hair in the shower ... or maybe it suddenly strikes me as I'm blowing a big bubble from my constant wad of bubble gum ... whenever it is, I get the answer and I can move forward for another day.
I have lots of ideas for fun, new designs, but I just don't have the time to knit them up right now. Instead, I'm learning all about PEG tubes and bolus feedings and what a PICC line is.
I'll be back, I promise! It just may take me a little while.
Posted by Nean the Bean at 8:21 AM 4 comments: