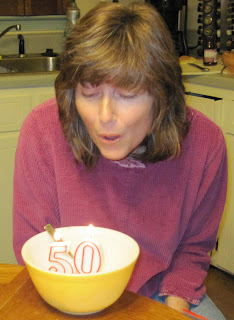 I am blowing out my 50 candles! (Well, just two actual candles ... with the "50" sentiment!) I had a cupcake in there, smothered with ice cream and fudge sauce. YUM. 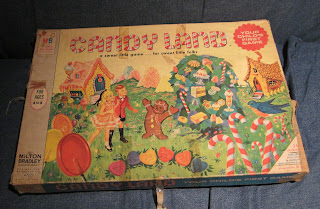 Here is my birthday present! A vintage (somewhere in the 1960s) Candyland game! Complete with the ICE CREAM FLOAT card! (Which was my all-time favorite!)

I realized the other day that I really haven't been posting anything for awhile. It's not that I don't want to ... in fact, there are TONS of things going on ... even little silly things every day that might get a chuckle or two, but there just doesn't seem to be any time to take decent photos ... and really, let's face it, even a funny post needs a photo or two. Even though these photos aren't very good, at least there's something to look at while you read. Anyhow, yes, my birthday was the big one this year. The one where now I am starting to receive the AARP magazine in the mail! (How did they know how old Randy and I are, anyhow???) I can't believe it, myself, as I still feel the same as I did 20 years ago. My brother and I were reminiscing about how, when we were little, my Dad would talk about World War II ... and we thought that was ANCIENT history, but in reality, it had only been 25 years or so. Now, to think that I graduated from college 28 years ago is really shocking! But, there it is!
Posted by Nean the Bean at 5:42 PM 5 comments: