Amelia at the Polgar 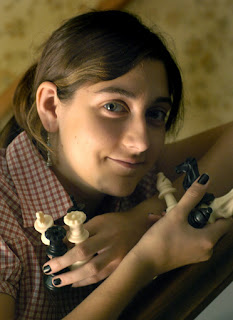 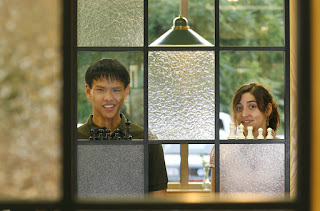 Amelia and Randy are in New Jersey this week ... she'll be playing the Susan Polgar All-Girls Invitational Chess tournament.
The Charlotte Observer did a really neat article on her and on Frank Mu, the winner of the NC State Scholastic Championship, in today's paper! Frank is the player pictured above with Amelia. Aren't the photos great? They came from the article. The bottom one was taken by JASON E. MICZEK - Special to the Observer and the top one was taken by DAVIE HINSHAW. Here's a link if you'd like to read the story. I don't know how long they keep articles available, so better click on it fast.
Posted by Nean the Bean at 2:48 PM No comments:

Colette Got Her License!

That's right! Thumbs up! Colette got her driver's license today! Yippee!
Posted by Nean the Bean at 9:16 AM 2 comments:

What seems like many months ago, I pre-ordered two copies of the final Harry Potter book for Colette and Amelia ... I was promised that the books would be delivered on Saturday, July 21.
All day, we kept looking for the books to arrive in that "special" delivery. I checked the order status on Amazon.com and it said they had arrived in Charlotte. I kept hoping they'd come before the guarantee deadline of 7 p.m.
But they were a no-show. They stood me up. Harry never appeared. 7:01 came and went. I sent a note to Amazon.com, and received a speedy reply, apologizing. I was also given my money back ... but still no books.
All day Monday, we waited for the mail to come. It came. No books in that delivery, either.
Colette and I went to Target last night and finally bought them ... but she'd had to endure a couple of days of her co-workers chatting and giving away details!
Alas. A small thing, but still disappointing.
Posted by Nean the Bean at 8:21 AM 1 comment: 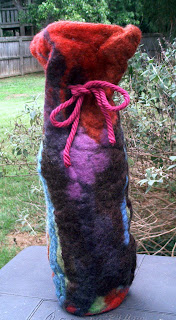 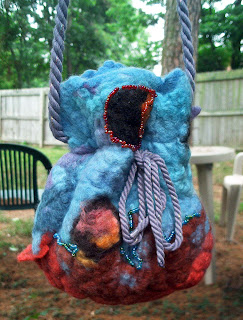 I added a drawstring to the wine sack ... and a drawstring, along with a cord shoulder strap and some glass beads to the little bag.
Posted by Nean the Bean at 1:55 PM 2 comments: 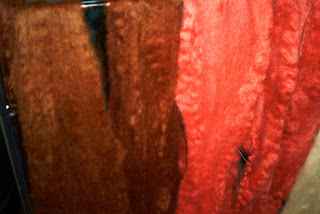 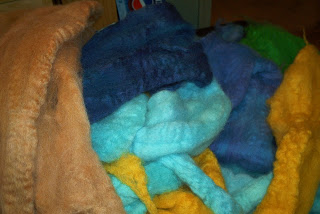 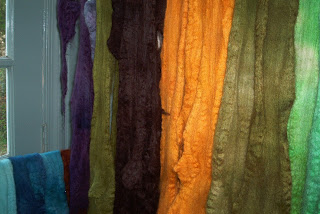 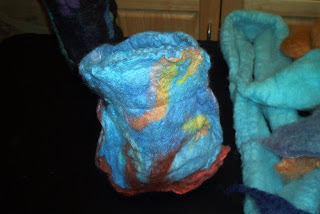 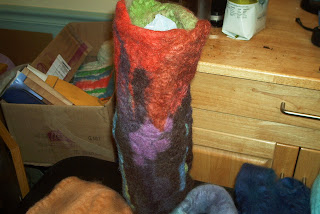 Wow. I'm tired. I've been experimenting not only with wet felting, but I've been dyeing roving for the past two days in preparation for the yarn store's workshop. I had to come up with a form to needle felt the wine sack. After trying lots of things (even carving florist's foam) and finally I came up with bending a piece of foam into a cylinder; keeping it that way with rubber bands and then wrapping it entirely in plastic wrap. Amazingly, it worked!
Here's a photo of the wine sack. I think it came out pretty well for a first try. Some of the glue from the water-soluble paper didn't melt off, but as it's on the inside, it's not that noticeable. I need to poke holes in it now and thread ribbon or something else through the top to tie it off.
My first attempt at the sack shrunk in height, but not in width! It looks ridiculous. I'm thinking maybe it could be a small evening bag, with the right kind of drawstring ... and maybe I'll add some seed beads to make it more exotic.
Posted by Nean the Bean at 8:00 PM No comments: 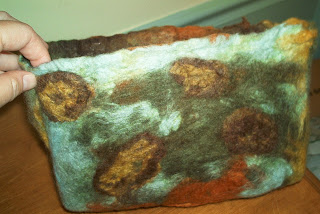 The week of July 4th, I experimented a bit with a kit the owner of our local yarn store gave me. She had gotten it at a convention she had attended. It was the newest thing in wet felting. It's called ArtFelt!
Well, the kit had a silent DVD with instructions, some merino roving dyed in various colors, some merino pencil roving in various colors ... and the thing that made the kit worthwhile ... a large piece of EasyFelt paper.

If you've ever wet felted anything, you know your hands get dish-panny very quickly. The combination of hot water and detergent as you rub your project back and forth on bumpy surfaces really takes a toll. Well, this revolutionary product allows you to design on the special paper ... punching the fiber lightly into it with felting needles. Then, all you do is saturate it with water, roll it in plastic wrap (then some pantyhose) and throw it in your dryer! In just a few minutes (I found 10-20, although they say it can be as long as 45) ... take it out of the dryer and Voila! You have a felted object!

Sounds great right? Well, it is interesting. Personally, I don't feel I have as much control over what the design will be as I do when I knit and felt, but then, wet felting is an entirely different medium, anyhow, I suppose.

After I did a bag with their materials, I tried my own roving. It's just Blue-Faced Leicester (yes, from the same stash I've had for a year) and I have to say, it worked just as well.

I then was determined to find a similar paper product. It feels just like embroidery stabilizer, only maybe a little thicker. I found some water-soluble, fabric-like stabilizer on eBay and gave it a try.

My items didn't come out quite as thick and solid as those made with the original EasyFelt, but they didn't turn out badly, either. I ended up making a few things with my substitute paper ... a strange bag and a couple of coasters. Take a look. Any comments would be most appreciated!
Posted by Nean the Bean at 6:57 AM No comments:

My life seems to have taken on a "Brady-ish" sort of quality these days ... yes, my life is right from the pages of a Brady Bunch script! I first noticed this strange coincidence when Colette failed to pass her driver's license test last Thursday.

Colette is 19 and rather embarrassed that she doesn't have her license yet. Circumstances, you see, have prevented us from really pursuing it. While she was in high school, between working at the library and going to chess tournaments, we never had time for her to practice driving. Days after driver's education seemed to slip into years and, before we knew it, she was off to college without a license! When finally we had the time to drive around and practice, we thought the insurance premiums were going to be too much ... but then that problem was solved when she was hired at a different branch of the library. She was happy to pay for the insurance herself! WOW! All obstacles gone!

Needless to say, she's practiced quite a bit and, last week, decided it was time to go get it. Well, *gulp* from the moment I saw her examiner, I knew she was in for a bad day. She cheerfully came out of the building and stood beside our car, which was parked at the very front of the lot. He came out of the building a moment or two later and stood on the curb, glancing around. "Well," he harumphed angrily. "I see you're standing at the car and not where I told you to stand!"

"Yikes," I thought to myself. "This doesn't look good and she's not even started to drive the car yet!"

Unfortunately, my instinct proved right. He was grumpy. He was mean. Colette said everything he asked or said was yelled. Needless to say, she flunked. Something about "wide right turns." He even drew little lanes on the back of her exam paper, sketching out lines that showed a proper right turn and the wide ones she was making.

All I could think about as I tried to console her on the way home, was the Brady Bunch episode where Marcia is encouraged to think of the examiner sitting there in his underwear to make her realize he's just as human and vulnerable as anybody else. So, this week, when she tries again, I'm sure she's going to see this man sitting there in his boxer shorts (well, the fellow in the Brady Bunch wore boxers. Maybe this guy wears briefs?? Ew! Yuck! Personally, I don't want my mind going there!)

Anyhow, the coincidence didn't stop with that! Oh, no! You see, Amelia, who's working at an ice-cream shop now, had an incident where one very faithful employee recommended a friend for a job there ... and the friend turned out to be not nearly as conscientious as the original employee. Again, I had to pull from the Brady archives ... when Marcia got the job at the ice-cream shop ... and recommended Peter ... who was eating the ice cream all the time and making a big mess!

We've been talking about the Brady Bunch so much, that last night, while we ate our Two-for-one-Large-Pizza (being Tuesday, as it was), we hunted around and found some old episodes we had taped awhile ago when they aired on Nick-at-Night's Block Party. We couldn't find the two that most mirrored our lives, but we did have a few laughs, anyhow. We decided two things: Everyone agrees we have to buy the DVDs and ... we all wish we had Alice living here.

Meanwhile, I ask myself, what episode will I live out today???
Posted by Nean the Bean at 6:32 AM 1 comment: