I can't believe it's been so long since my last post! Things have been hectic here, as usual. Maggie the beardie has been suffering with a urinary-tract infection, among all her other "issues!" WOW. Sometimes I just wonder when she'll be well for awhile. She's still her happy, bouncy self, though. You wouldn't think anything's wrong.
Meanwhile, I'm back at my knitting after having to put it on hold for a week or so ... my Mom took a fall and we had to go to the ER ... she suffered a laceration to her face (upper cheek) and a bruised rib. The stitches came out last Thursday and the area looks very good. I'm hoping it won't leave a scar. Very scary! I so wish I could keep her from falling! The good news is that she now weighs 105 pounds, up from the 98 she was in December.
As for my Dad ... he's in physical therapy and we're hoping this will help his walking, though he doesn't really like to do the exercises! I guess I have to get out some good Sousa marches and get him going! "Up and at 'em!" as he used to say to us in the mornings!
Kent's new guitar arrived and he's playing up a storm! Amelia now sports aqua blue hair and nails; Colette is now "officially" minoring in Japanese ... and Randy is planning the yearly invitational chess tournament.
So, everything is going along. I'm afraid I've been obsessed (yes, absolutely obsessed) with acquiring patterns on Ebay... and why is all the good stuff always from the UK? Great dk yarn; fantastic toy patterns, etc. *sigh. Shipping costs really hike up the price!
I finished the Boston Terrier, but forgot to take a photo of him before I gave him as the gift! Oh well. Kent and Amelia agreed his button eyes made him look like he had glasses!
Well, the lilacs have buds ... my cheddar pinks are starting to bloom ... and the birds are all back at the feeders! Spring is definitely here!
I hope to have some more photos up later as I am just finishing an entirely new tea set! The teapot is more like a pitcher, but it's from a pattern that is already available for free on the internet. I'll post the link later.
Bye for now, as I must take Maggie's first-morning urine to the vet! How lovely!
OH! I haven't forgotten ... just haven't had time yet ... look for the new Cookie of the Month coming soon. It's an umbrella sugar cookie from the April Martha Stewart Living magazine!
Posted by Nean the Bean at 7:48 AM No comments: 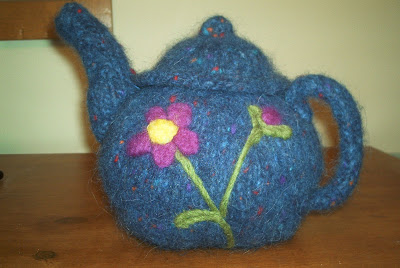 Here is the teapot with felted flowers. Any thoughts? Are they too big? Not delicate enough? I also used a bit of thread and picked up the spout. I think it looks a little better, but for the next one, definitely should be smaller in size.
Posted by Nean the Bean at 2:43 PM 3 comments:

For this one, I used Lopi yarn (1 strand). I made the spout bigger. I think it looks too big now, but it's the actual size of the spout on my own teapot (which I used to block it while it was drying). What do you think ... too big? I stuffed the teapot with wool batting, poking some Earl Grey tea into the stuffing as I went. Then I used a little filter paper and made a small tea bag of Earl Grey to stuff in the top right under the lid. The tea idea was Judith from Massachusett's! I think it's a great suggestion. I may find cheesecloth to put a lot of tea in and put that in the center of the stuffing the next time around. Also, I changed the lid. Instead of knitting from the center out, I began from the outer edge and then decreased toward the center. Again, any thoughts, suggestions, criticisms are most welcome! Thank you for looking!
Posted by Nean the Bean at 9:17 AM No comments:

Here's my first attempt at the felted teacup with a pedestal. What do you think? I feel like I need to make the pedestal a bit wider where it attaches to the cup. I still think I need 2 strands of wool. I only used one this time. Also, I knitted a few more treats. Take a look at the photo, please.
Posted by Nean the Bean at 9:19 AM 2 comments: 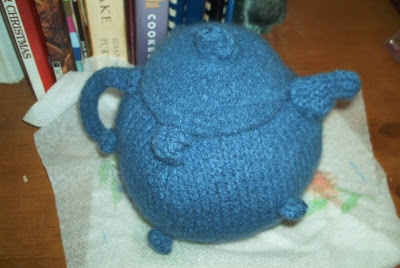 Here's a photo of the teapot! I finally finished it. I have one teacup and saucer left to go and lots of the foods. Will try to finish today and post tomorrow. What do you think? I don't think I like the bobbles now that they are knitted in! And what a lot of work to put them in as I went! Next time, I'll leave them off and see how it looks. Any suggestions for improvements would be most welcome!
Posted by Nean the Bean at 11:33 AM 3 comments:

This week is testing week! So, I finally have a little time to write again. Sorry I haven't updated in awhile! I was waiting until I had some more of my foods/toys knitted before I posted so that I could put some photos here. Amelia's camera took a tumble at her Tae-Kwon-Do brown-belt testing on Saturday, so it's out of commission at present. I'll try to get some photos up using the old camera later.

While the camera took a tumble, the belt testers did not! Happily, Colette, Amelia and Kent all passed their brown-belt test! They had a little ceremony to award the belts right at the testing! It was quite exciting. They'll get to change from white uniforms to black now, too!

Last week, we headed to Durham for the state chess tournament. I was all prepared to spend the whole weekend knitting; however, my head had other plans. Thursday evening my migraine started. It didn't go away until Sunday, so I didn't get much done. The hotel room was nice; however, and the bed was comfy. Fortunately, I could pull the drapes and get it quite dark. I'll post a column-like bit about the hotel restaurant later!
Amelia placed 14th in the high-school division! Congratulations to her! She was up against stiff competition. Check out the chess website .

Despite the setback last weekend, I am almost finished with the Boston Terrier! I just have to knit his ears and then finish working on his face. He came out pretty well, although I'm not completely happy with the overstitching. I'll have to practice more before I start the tiny pieces for the Nativity set. The Boston Terrier pattern had some strange wording and I had to just figure some of it out as I went along. I guess that's how it is with a lot of patterns and this was an old Beehive pattern from the '40s or '50s.
Meanwhile, my bidding on the Alice in Wonderland Dormouse-in-a-teapot pattern went way out of my reach ... I finally had to admit defeat and give it up. I stopped bidding at $38!!! In the end, I guess I'm glad, because I was doing a search this morning and found a darling felted teapot and pattern posted on a blog! Go take a look here at Grammieknits blog.

I can't wait to make it! Look under August 2006. I am going to try to change it a little to make it bigger and, as I don't know how to crochet, I'm going to knit the lid with dpns. The teacup and saucer are incredibly cute, too! I have two skeins of blue Cascade 220 and I think I'll try that. Cascade 220 always felts reliably.
I have finished the prototypes for the knitted tea-party treats and have decided I need stiffer cardboard inside the tea biscuits. I finally found some nice, dark brown dk yarn to knit the ginger biscuits. I have noticed that dk-weight yarn is very difficult to find locally. Everything seems to be too light weight or too heavy. Either sock yarn or worsted. Drat!

As soon as I have the whole tea party ready, I'll take photos! Check back by the end of the week. Happy Monday to all!
Posted by Nean the Bean at 8:31 AM 1 comment: