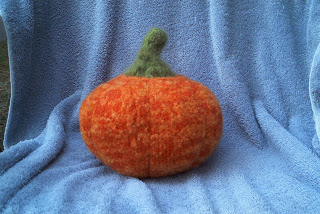 Here is the rough draft of the pumpkin in-the-round knitting pattern. Please let me know if you don't understand something. My notes were scribbled! I've made it a couple of times, though, and it has been working (for me)!!
PLEASE READ THIS NOTE! It has just been brought to my attention that my directions are a bit sketchy!
You actually knit back and forth (on two needles) until you get to the round where you divide your stitches onto the three double-pointed needles.
Please, please email me with any questions because I am new at writing my patterns out for others to follow.

Stem directions are below. The pumpkin measures about 9 inches tall and 27 inches in circumference. You could also felt a swatch of black and cut out face shapes. I've thought about attaching faces with velcro! SO you could change his personality from day to day. (Just a thought!)

Abbreviations
k1 - knit one
p1 - purl one
k1 f&b - knit into the front and back of a stitch. This increases one stitch.
k2 tog - knit two stitches together. This decreases by one stitch.

Use three, size US 10 1/2 DPN needles. I knit mine with two strands of wool held together. I used one strand of chunky Cascade orange and one strand of Nature Wool orange blend. You could also use one strand of Lopi; however, if you use other yarns, your pumpkin might end up smaller or bigger, depending on your yarn.

Cast on one stitch on a larger needle than the double-pointed needles you will use.
Round 1 - knit one, purl one, knit one all in the same stitch

Round 7 - Place stitch marker to mark first round, join and k1 f&b, k1) to end of round (be careful not to twist your stitches or you'll end up with a moebius something and not a pumpkin)!

Round 46 k2 tog, k2 all the way around BUT BE CAREFUL! Watch opening. Don't let it get too small. If it looks small, you can stop after round 44 and start the next rows instead:

Round 49 - I used the i-cord bind off because it gives a nice, finished hole; however, if you think this is too fussy, just bind off normally and don't bother. No one will see the hole in this pumpkin, as the stem will be sewn over. The i-cord bind off is great if the hole will be seen.

Put pumpkin in lingerie bag and throw in washing machine. The Nature Wool/Cascade combination definitely felted faster than Lopi for me, so take it out every five minutes or so and just make sure it looks the way you want it to look.
When it's finished felting, take it out and rinse, then roll in a towel. I stuffed mine with polyester fiberfill while it was still wet.
To get the characteristic pumpkin bulges, tie yarn (I used orange because my pumpkin was still wet and I didn't want any other colors to run into it) around the pumpkin from the bottom to the top and pull as tightly as you can, then knot off. Do this 4 times, adjusting where you tie the yarn from bottom to top, dividing the pumpkin into 8 wedge-shaped bulges.
Let it dry COMPLETELY. I'd say, wait three days before untying to make sure that the grooves stay in place.

Using a larger size needle than you will use DPNs, cast on 54 stitches.

Round 11 knit until you get the desired length for your stem. I'd say about three inches.

When you are ready, purl your last row, then bind off. Pull your yarn down inside the stem tube before you felt it.

Throw stem into lingerie bag and put in your washing machine. I usually throw in a pair of jeans to help with the agitation. Use a little Wool Wash or Woolite or even a bit of laundry detergent, if you haven't any Woolite. Use the hot setting. My washer has only hot with a cold rinse; however, I never let my felted projects go through the rinse. Continue to check your stem about every five minutes. When yours is felted to the size and look you are satisfied with, remove. When dry, trace pumpkin-hole size onto bottom of stem piece and cut stem to fit over the hole. You can go ahead and cut the felted piece. It won't unravel!!! Stuff stem tube, if desired. Stitch stem piece securely to pumpkin.

I am still working on leaves and tendrils! I intend to i-cord the tendrils and while wet, wrap around a dowel or pencil and let dry like that so they'll end up curly. The leaves can be cut from a felted swatch. Knit a piece, felt it, then use a real leaf (I like Oak and Maple or an ivy leaf or even a grape leaf) and pin it to the swatch. Cut out and stitch onto pumpkin wherever you'd like it! Again, if you run into anything that you have a question about, please email me.
Posted by Nean the Bean at 8:27 AM

Cute pattern. Thank you for posting it; I hope to try it soon.

Hi, Shelley! Sorry I'm getting to your question late! Yes, just go ahead and follow the increase pattern for the entire round. I'm sorry I didn't make it more clear. I should add that to the pattern! I hope you enjoy!

OK so I've now made 3 of these pumpkins (LOVE the pattern!!!). 2 are still drying before I put them together so I haven't taken pictures yet but I am wondering about the stem...
On Round 9 I have 8 stitches per needle but on Round 10 your instructions only show how to deal with 6 of the stitches. Instead of doing that, I've been:
Round 10: k2tog, k2, k2tog, k2
Round 11: knit
Round 12: k2tog, k2, k2tog
Then I do the knitting for 3-ish inches. I'm not sure what you intended but I thought I'd write it out. Thanks again for the fun and very cute pattern!