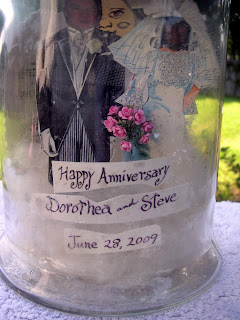 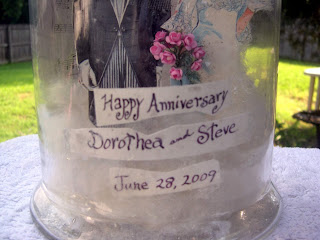 Another close up of the final jar ... here are some photos before I changed the anniversary. 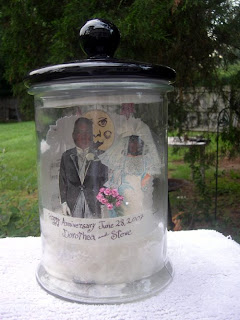 Here's a full view of the Happy Anniversary Jar for my sister and her husband. The jar magnifies everything inside. I think I would have liked it better if it didn't! 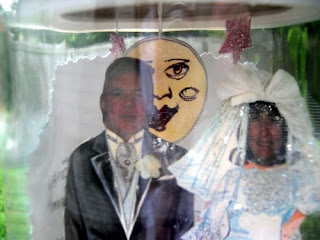 Here's a close up of their faces. I won an auction for some old 1970s paper dolls and then found a photograph of the two of them and printed their faces out on watercolor paper. After cutting them out as best I could with an Exacto, I used some spray adhesive to put the faces on the paper dolls! 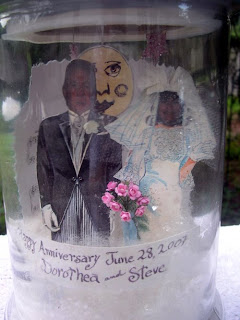 I filled the bottom with wool roving finger combed with flash ... and lots of mica! 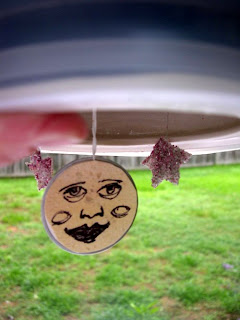 I painted some watercolor paper with yellow and orange and let it dry, then I used a calligraphy pen and drew the moon face. You can't see it very well, but I put mica on the moon, too! I made a couple of impromptu stars and put a lot of glass glitter on them. I hung all these from the inside top of the jar. 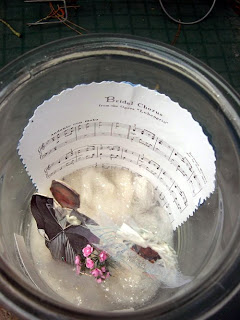 I cut out the Bridal Chorus and used the music as the backdrop. 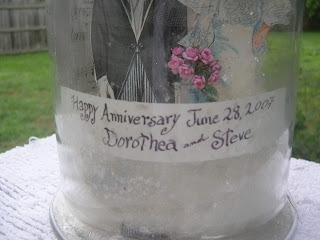 I added a lot of glass glitter to the paper doll's gown and glued on some paper flowers for my sister's bouquet and tied them with a little ribbon. I used a small paper flower for her husband's boutonniere. I also used a bit of netting and a little crepe paper for her veil. I know it's a little odd, so I hope they like it! I have been getting lots of ideas for jars ... like Happy Birthday jars and that sort of thing. I think I learned a lot about spray adhesive and being patient!!! The back is not as clean as I'd like ... the glue smeared a bit ... but it'll have to do. I do wonder what they'll think of it! Now onto package it up and take it to UPS. I hope it doesn't break!

I've never seen anything like this before. It is so unique and personalized! The happy couple should love it. Not only for being kind of funny (at least I think so) but especially since it shows the time and effort put into it! Nice work :)

Thanks for your kind comment, Amybel! It is supposed to be funny ... I thought the '70s paper dolls were a perfect fit! I admit, it's a little strange. My eldest daughter thinks it's "creepy," but my husband says it's "cute." Hmmmm. I tracked it and it was delivered today, but I haven't heard from the happy couple. Gulp. Maybe they think it's creepy, too!!! Uh-oh! It's not supposed to be creepy!!!!