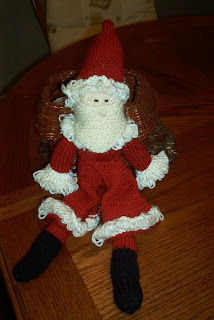 Here is a front view of Father Christmas 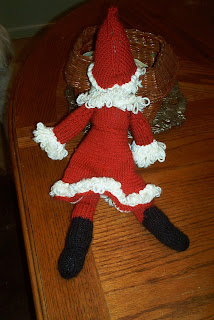 Here is a back view of Father Christmas
I finally finished Father Christmas. It took lots longer than I had anticipated and he is riddled with errors. If I ever make him again, I'm sure I'll do better next time. The pattern is very cute; however, the directions are very misleading. Here are a few things that might make it easier for you, should you decide to accept this mission:
When attaching the second leg: Transfer your stitches from three needles to two on the leg you just finished working. Knit across, adding in three stitches in the middle to connect the two front legs. You will need two more needles here. The front will be knitted on two needles and the back on two needles ... going across, if this makes sense. Check out mochimochiland for a great explanation of how to do this.
Also, it's important to note that the loop stitch is made by working three rows: the first and third row are simply knitted; the second row is where all the looping is done: It begins with a knit stitch, then works the remaining stitches with the loop (which is formed by wrapping the yarn twice around your index finger of your left hand, then inserting needle into them both, wrapping yarn around the needle and knitting all three), then knit the last stitch in the row. These instructions are quite UNLIKE those you'll find in the Ann Budd pattern!
For the collar, I actually cast on 50 (I'd probably do 45 next time); however the amount called for in the pattern would never go all around his neck. Perhaps the original design only has the collar in the back, as his beard is in the front? Not sure, but I like mine better.
For the arms, I knit them separately, changing to flesh-tone yarn before the last 8 rows. I knitted 26 rows in red/8 in flesh-tone yarn for both arms. I seamed them up the back. My collar is large enough to cover where the arms are sewn onto his body.
For the miter ... or mitre, if you prefer (bishop's hat) ... the directions were not good. I ended up dividing the stitches that I increased on needle two among the three needles after the initial 6 rounds, as if I had not, I would have run out of stitches on my first and third needles (as you continue to decrease) long before I would have run out on my second. Also, I stopped when I still had about 8 stitches on the needles and used the gathering stitch to pull them together.
Also, I chose Debbie Bliss Baby Cashmerino and am quite disappointed. The yarn, although wonderfully soft and comfy, stretched the whole time I was working with it and shows the stuffing terribly. It's already got slubs in spots and nobody has even really played with him yet!
Let me know what you think!
Posted by Nean the Bean at 2:08 PM

Sounds like you went through a lot to get him done but he is just too cute. I think you did a wonderful job. It's nice of you to share the tips for anyone thinking of taking him on.
Hugs!

I think he looks great!

I think he looks great. And you beat me to finish yours first! I still have to attach all of my loopy parts. I've been swamped with other things.

Father Christmas is wonderful!!! I got my christmas pickles done, I knitted one and crochet the other. Your pattern is the BEST!! Check it out on my Dec. 11 post.
Had no trouble following your instructions.
Thanks Again
Happy Holidays!!
Vicki
http://knittingdragonflies.blogspot.com/