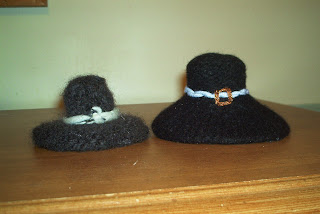 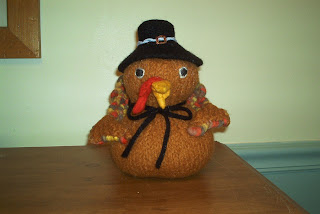 Felted Thanksgiving Turkey with Pilgrim Hat
Copyright 2007 Anita M. Wheeless
I used four size 10 1/2 double-pointed needles for this project. I used Tondo yarn by OnLine. This yarn has been discontinued ... I bought mine on sale, so it was in my stash to use for this turkey. Feel free to substitute either one strand of Lopi or two strands of Cascade ... either one chunky and one 220 or something similar. For me, the turkey, itself, took exactly one 50 gram ball of Tondo and then there were still the feathers (wings) to knit. I would definitely purchase two to use. I used another ball of Tondo (in a multi-color) to knit the tail.
For body and head:
Cast on one stitch.
Knit one, purl one and knit one again into this stitch. You now have three stitches on your needle.
Knit
Knit front and back in each stitch (increasing one for every stitch). You now have 6 stitches.
Knit
Knit front and back in each stitch again. You now have 12 stitches.

Now we will start the decreases for the top of the head:

k2 tog all the way around

k1, k2 tog, k1 all the way around ... be sure at this point that you are leaving a big enough opening for stuffing. You will cover the top of his head with the hat later.

(knit 1 f&b, k6) on needles one and two. Bind off needle three and knit the rest of the way around.

Turn and purl back on just the two needles.

*Turn and k1 f&b in each stitch

Turn and purl two together all the way back

Use a crochet bind off** to get the little loops.

*If you want your tail larger than the one I made, simply do this as many more rows as you like, increasing in the same way (for instance, on the next row, instead of increasing in each stitch for the ruffle edge, you would k1 f&b, k7 and then purl back ... on the next row, you would k1 f&b, k8, etc.) until you get to the desired size. If you like mine, then you will just continue with the ruffle part by increasing one stitch in every stitch as above.
**Using a few chain stitches hooked together makes a nice, little loop. But if this is too fussy for you, I would knit/purl back a couple more rows after the doubling increase and then simply bind off in the usual way. You should still get a ruffle.
Using the crochet chain stitch is easy, just time consuming. Simply insert a crochet hook into the first stitch on your needle. Chain 5, which is a lot like latch-hooking a rug. You just bring the yarn around the end of the crochet hook and pull it through your stitch. See how it's made a little yarn circle? Now you have one chain. Do this again and again until you have five little yarn circles or "chains." This little chain thing will extend beyond your knitting, if that makes sense. Then, insert your crochet hook into the next TWO stitches on your needle and pull the yarn all the way through all three stitches (the two you've just inserted the hook into and the first one that is on your hook already). There's your first loop! Now you just chain five again, insert hook into the next two stitches, pull yarn through all three, etc., until you have used up all the stitches! That's all there is to it!

I used three size US 10 1/2 double-pointed needles and one strand of Cascade Bollicine Revolution yarn for the hat, white dk weight (or worsted would be fine) for the band and a tiny bit of Lion Brand Glitterspun for the buckle.

Cast on 48 stitches onto one needle.

Divide among the three needles by purling 16 onto each. Place a stitch marker.

Knit 6 rows (or for a narrower brim, knit less rows)

Then decrease for the rest of the hat: knit 2 together all the way around.

I knitted two rows more at this point, then continued decreasing.

knit 2 tog all the way around and, using a gathering stitch and a yarn needle, pull a length of yarn through the remaining stitches, pull tightly and knot off.

If you liked the smaller hat, please do as follows. I used two strands of New Zealand 2-ply yarn, but you could also use 2 strands of Cascade 220 or something similar:

Divide onto the three double-pointed needles by purling 12 onto each. Place stitch marker.

k2 together all the way around

k2 tog all the way around and use gathering stitch as above to finish off.

How to Felt Your Pieces:

After you have all the pieces made, put them in a lingerie bag. Put a bit of Woolite or other laundry detergent in your washing machine and set it to "small" or "mini" load. I usually add a pair of blue jeans to help with the agitation. Blue jeans do not give off lint, like other items might. Try to keep other items out at this point. Set your washer to "hot." I usually throw my lingerie bag in the area where the water is filling, so that it gets pounded by the rushing water. Close lid and set a timer for about 5 minutes. Check it every five minutes or so, just to make sure it's felting as you'd like. You may have to reshape it a bit. Tug it this way or that. Some pieces may felt faster than others, so go ahead and remove them when they are to your liking. Rinse them in cool water and roll in a towel.

When your turkey body is finished, rinsed and patted dry, stuff with polyester fiberfill, pushing it all the way down into the bottom and all around, filling him full to the top. This may take a little doing, as you've left a pretty small hole in his head! I pulled the hole open a bit and stuffed the stuffing down, working it around to fill out his body.

The hat needs to be placed on a form of some sort to get the right shape. Ideally, I think a shape like the top of a Redi-Whip whipped cream can looks about like a Pilgrim hat, but I used an upside-down glass votive candle holder. I wrapped a rubber band around the area where the band would be on the hat. Let it stay like this until completely dry. (Most likely that will take a day or two.) You may stuff the upper part of the hat with polyester fiberfill before securing to head, if you like.

Finishing: Let the other pieces dry, then mattress stitch the feathers as directed above. With white yarn, chain stitch the band along the Pilgrim hat and straight stitch a buckle. For his beak, I wet felted a bit of yellow roving in my hands, rolling it back and forth and then folded it down upon itself. For the wattle, I used a little red roving and also wet felted this in the same way, but left it a little less compact so that I could place a piece onto his beak. I think this part is called the snood! I then sewed this pieces onto his face with a bit of embroidery thread. His eyes are satin stitched with black yarn and outlined in straight stitches with white yarn.

As always, if you have any questions, or run into any problems, please email me! I hope you enjoy your turkey!

Adorable! I may have to try him to add him to the felted pumpkins. Thanks for sharing

How cute! You have done a terrific job. Is there a book in the works on these toys?

Another NC knitter in Chapel Hill

The hat is awesome! I love this little turkey but am allergic to wool so I just have to look and drool over these wonderful felted patterns. Beautiful job!