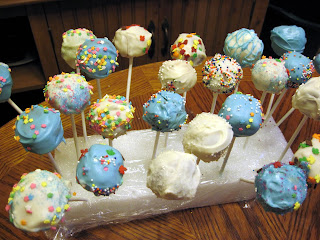 My very first attempt at making cake pops. They taste very good, although I still need a lot of work on the decorating! 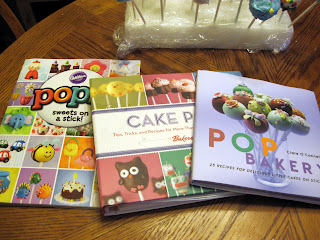 There are LOTS of cake-pop books out there now. Here are a few. My favorite recipe so far is in the book that has not arrived from England yet (but the recipe is free, online).


Cake pops. The name implies a piece of cake on a stick ... and, well, bottom line, I guess they really are cake on a stick. BUT what makes cake pops so incredible are two things: The fact that you mix icing INTO the cake before it gets placed on a stick ... and the fact that you cover the cake completely in a melted candy coating, which you can decorate in any way you can possibly imagine!Cake pops are not really all that new. In fact, they've been around for awhile. Martha Stewart did a show on them, featuring Angie Dudley of Bakerella.com fame, back in April of 2008!! That's right! Three whole years ago!

I hadn't heard of them until a few months ago when my husband brought one home from the office. One of his co-workers had made it. It was wrapped in cellophane and looked cute, but I really had no desire to try it. "A cake pop," I said to myself as I twirled the stick around in my hands. It took me a day or two before my sugar consumption was low and it was the only thing around. One bite and I was hooked. It was delicious. In fact, it was more than delicious. It was just INCREDIBLE. After that introduction, I really didn't think about cake pops too much. I went about my usual routines. I started planning my next big knitting project. (I have two in the works) ... and I'd been suffering from knitting withdrawal. Do you know I haven't knit in earnest since February when I designed Incognito? Sigh. I know. Isn't it terrible when life has so many demands one can't even knit??? Well, the next thing that happened was quite a set back, really. I was outside, weeding, a couple of weeks ago. I got poison something or other ... in a big way. It was so bad, my son said I looked like somebody took a can opener to my arm. Yes, big, lash-like welts were everywhere. It was on both arms, my leg and a patch on my face. The itching was horrific. I couldn't even think about knitting. While I recovered, taking prednisone and slathering on some kind of cortisone cream, my mind turned to cake pops.

I started looking at cake-pop photographs. I started imagining my own kitchen as a sort of cake-pop bakery! YES! I needed candy melts in every color and sprinkles! YES! TONS of sprinkles of all shapes and sizes! I needed fondant and gum paste, cocoa butter for painting, edible glitter and luster dust. The list went on and on ... and suddenly, I had spent over $300 on cake-pop supplies. THEN reality hit. Why, I wasn't going to have a cake-pop bakery! How ridiculous! I was just going to make some for special occasions and to give away. Why, everyone at home was watching his/her weight, anyhow. Why would I start baking tons and tons of cake pops??? What the heck?

It must have been the prednisone taking over my brain, creating some mad steroidal rush!! NOOOO! What have I done? Well, I did the only thing I could do. I started to make them.

I made two batches. One from a recipe from Molly Bakes Cake Pops that is available free online and the other from the Cake Pop Bakery book. And because Molly Bakes Cake Pops is a British-English recipe, I also had to purchase a food scale that would allow me to measure my butter and other ingredients in grams. (Yet another cake-pop purchase!)

Well, both cakes came out tasty (I prefer the Molly Bakes recipe, actually), but I still need lots of work in the decorating category. Okay. Now that cake pops are out of my system, and the poison whatever has only left vague, pink scars, I can go back to knitting. *Audible Sigh*
Posted by Nean the Bean at 5:10 PM