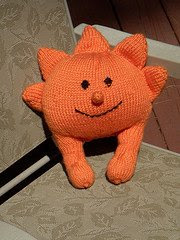 Mollymeow from Ravelry made this beautiful Wedding Sun from my Take-Along Sun pattern. She has a couple of pattern modifications to share:

It might be worthwhile to knit the rays in the round rather than as halves and then sewing them together, since I found that seaming the two halves led to smaller, slightly bunchy rays. also, I think the space between the legs might have been a little large, though maybe I just wasn’t so great at sewing it up in a nice-looking but also gathered way.
I really like her suggestion to knit the rays in the round! Now, why hadn't I thought of that??? Meanwhile, I do pull my take-along sun's legs together when I use the gathering stitch to close up the bottom hole. But if this doesn't work for you, feel free to play around with the amount of stitches you cast on with the backward-loop method when joining his legs to his body. Just remember to add the same amount to the back as you do to the front!
Thanks, Mollymeow, for sharing your wonderful sun!
Posted by Nean the Bean at 3:07 PM