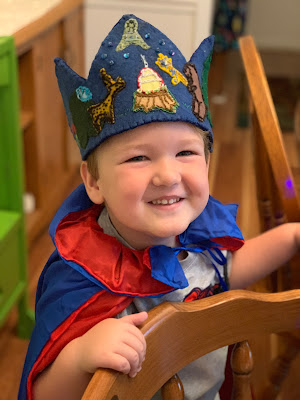 Here is my first attempt at a birthday crown. I started this so many times ... months ago! I finally finished the night before my grandson's 4th birthday! Phew!

I had seen so many magnificent pieces online. Quite a few looked to have been needle felted. While I have tons of roving that I dyed years ago, my first attempt was definitely not up to par! I ended up taking all of it out.

Then, I tried to embroider directly onto the felt, but having chosen such a dark color, the little figures didn't show up very well. So I took all of the embroidery out, too!

Finally, I cut the shapes from felt, then embroidered details, and attached them to the crown with various stitches (some straight, some chain, some blanket). I added a few glass beads and sequins for a little sparkle. It's far from perfect, but ... fortunately, the Birthday Boy likes it just as it is!

I had also seen lots of photos of woodland-themed cakes. Some were really amazing! Mine is very, very simple. The Schleich animal figures are entirely the best part!! I made the Hershey Bar cake, which is really quite rich, so using less of the icing worked out incredibly well. I grated some of the chocolate for the top, trying to resemble "dirt." I had seen another cake where rosemary sprigs stood in for trees ... so, having a huge rosemary plant in our yard, I cut a few sprigs and added them to the background. Because the animals are pretty heavy, I would recommend adding them last ... right before you're going to serve it. 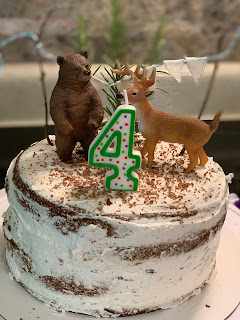 Posted by NeantheBean at 2:32 PM